IL HISTORY AND THE BICENTENNIAL

In 1885, Frank Alsip and his son Charles established the Alsip Brick Yard, located between 119th and 120th, and Cicero and McDaniel Streets. This is now filled in, and industrial development has been established in this area, as well as a subdivision. The Alsips were a prominent Chicago family, but did not reside in this area which would later bear their name. (Alsip Golden Jubilee Booklet, 1977)

The Alsip-Merrionette Park Library began as a voluntary library in December 1969, and opened in a donated trailer in March 1970. (Its ribbon-cutting ceremony is pictured here.) 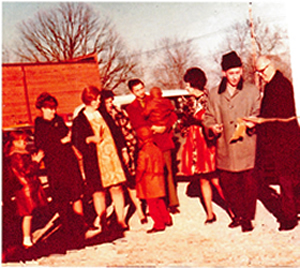 The building served its community well for thirty years, but an upgrade was necessary to meet the changing needs of the community. Another referendum was passed, and the Library board and employees invested many hours in planning the renovation.

Staff and movers relocated the library collection and computers to a temporary location at 12838 S. Cicero Avenue while the Pulaski building was gutted, renovated and gained an addition of nearly 14,000 square feet. Staff started moving back into the newly remodeled building on Pulaski on February 4, 2013, opened to the public on February 25, 2013, followed by a grand opening celebration on March 3, 2013. The community enjoys the beautiful new facilities, and library usage has increased

Click here to view a slide show on the history of our library. 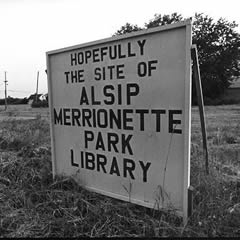 Click here to view a timeline of the library's history.

Thanks to Trustee Les Engelbrecht for researching and preparing the slide show and timeline.